Tolson's top ten treasures are objects on permanent display in Tolson Museum. They were chosen by museum staff because they all have a story to tell about this area and the people who live here.

Built in 1914, this is the only fully restored Valveless in the country. The Valveless Car was manufactured between 1908 and 1915 by David Brown Gears of Longwood, Huddersfield. 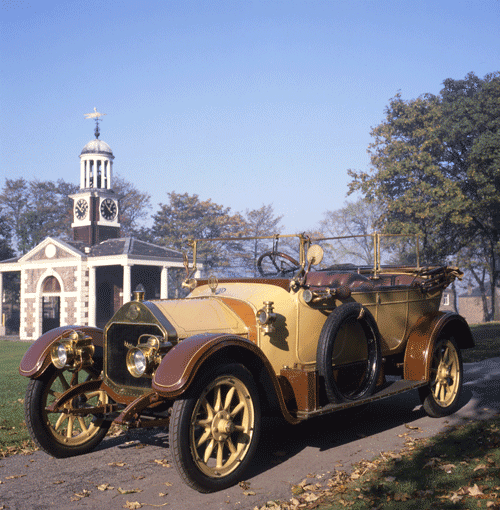 There were four versions of the Valveless, but only a few hundred were made. The benefit of a valveless engine is that it has fewer working parts than valved engines. It is typical of pre-WWI cars: large and expensive; chauffeur-driven; hand crafted. Valveless cars were comfortable, quiet and smooth-running.

Tolson's Transport Gallery also has a Valveless engine rescued from Waterloo, near Adelaide in Australia. It was returned to Huddersfield by the National Motor Museum of Australia. It also displays David Brown vehicles, horse drawn vehicles and various bicycles, as well as railway and other public transport artefacts.

A reminder of the great days of Huddersfield Town F.C. in the 1930s, this Huddersfield Town nameplate was fitted to the London and North Eastern Railway "Sandringham" class 4-6-0 locomotive 61653, built at Darlington in April 1936. Twenty locomotives of this type were named after the first tier clubs of the period, though none were from East Anglia where the locomotives worked. 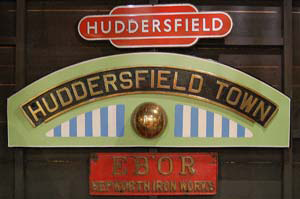 The nameplate and the objects in the railway hut formed part of the Huddersfield Railway Circle collection originally displayed in their clubroom at Huddersfield station. They are on loan to the museum. The Circle hosts regular talks on rail transport subjects.

Knurr and Spell used to be a hugely popular game in Yorkshire. Competition prize-winners won large amounts of money and betting was common. 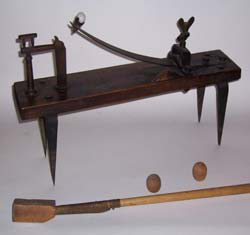 The spell is a wooden board with a spring-loaded cup and spikes to get a good grip in a field. In some areas a sling suspended from a frame was used instead.

The original knurr, knurl, knur, or nur was a ball about 4cm in diameter made of box or other hard wood, carved or finished by hand. In the late 19th Century, pottery balls about 2.5cm in diameter and of standard weight were introduced.

The pommel is the stick used for striking the knurr and with which the spring is released throwing the knurr into the air. The shaft was of hazel, hickory or ash. The head was of hard resilient wood and spliced to the shaft so that either could be replaced.

Yorkshire Film Archive has a film about Knurr and Spell from 1963-4. Leodis, a Leeds photographic archive has images of knurr and spell players.

These ceilings were originally part of Whitley Beaumont Hall near Huddersfield. 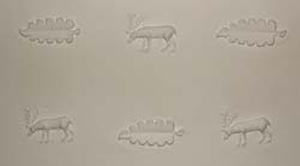 The stag and leaf motif ceiling dates from the hall built in the early 17th Century. The hall was remodelled in the 18th Century and the beautifully crafted harvest motif ceiling dates from then. It was probably designed by James Paine, who was closely connected to the family. A leading architect, he worked on several great Yorkshire houses and created Doncaster Mansion House. The ceiling originally had a border of plasterwork floral swags.

Kirklees Image Archive has photographs of the original hall and Huddersfield Local Studies Library and the West Yorkshire Archive Service, have information about the hall and estate.

These wooden panels were painted in 1567 for John Kaye, who lived at Woodsome Hall. The white lines on the photographs are caused by gaps in the wood that have opened up over the centuries. 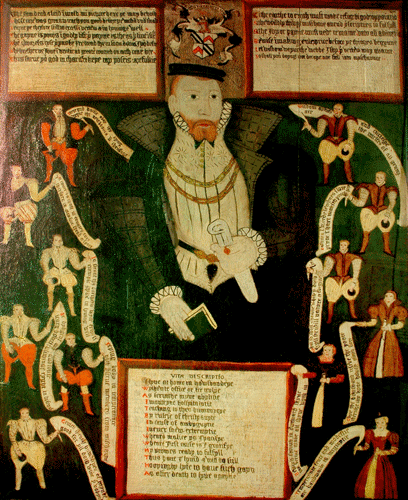 The panels have several messages from John and Dorothy to their descendants, including the two poems.

This collection of coins was found in Spring Wood, Netherton. They were buried for safe keeping during the English Civil War. The 81 coins date from the 1550s to the 1640s. The hoard was found in 1897 by Mr J Hinchcliffe, who donated them to the museum in 1923. 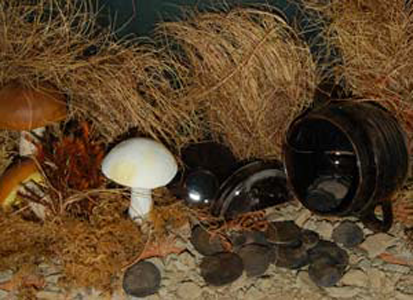 If you are lucky enough to find any archaeological objects, you can contact the Portable Antiquities Scheme.

Please note: The Skelmanthorpe Flag is not on display at Tolson Museum at the moment as it is currently undergoing conservation assessment and cleaning in Manchester.

From Spring 2019, we're delighted that the flag features as one of the star objects in an important new exhibition at the People's History Museum in Manchester. 'Disrupt? Peterloo & Protest', commemorates the 200th anniversary of Peterloo.

The Manchester exhibition runs from 23 March 2019 to 23 February 2020 at the People's History Museum.

The Skelmanthorpe Flag will return to its home at Tolson Museum in April 2020.

This cotton flag or banner is a rare survivor of thousands of banners carried at meetings calling for electoral reform and suffrage. 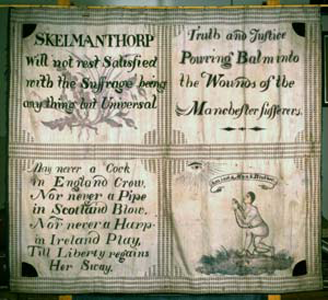 It has a remarkable story. It was designed and made in Skelmanthorpe in 1819, to honour the victims of the Peterloo massacre in Manchester.

The banner had to be hidden between meetings: if it had been found its custodian would have been arrested and it would have been destroyed. On the way to one meeting it was hidden in a flour wagon. Immediately after meetings it was removed from its poles and buried in a specially made box.

The banner is one of four usually on display in the museum. The Florence Lockwood banner, dated 1907, is an embroidered landscape of the view towards Slaithwaite. It originally called for 'Votes for Homes', but this was later changed to 'Votes for Women'. It was used by the Huddersfield Branch of the National Union of Women's Suffrage. The others were used at an 1832 York meeting led by Richard Oastler calling for a 10 hour working day, and Deighton United Methodist Sunday School events. Other banners and flags are in the collections.

The Skelmanthorpe Flag was selected to be part of the regional A History of the World. This is a joint project between the BBC and the British Museum; it uses objects to tell a history of the world. 100 objects from the British Museum are featured in a series of radio programmes, and as part of the project regional museums were invited to suggest their own significant objects.

View of Huddersfield by William Cowen, 1849

This oil painting of Huddersfield from Ashes Lane by William Cowen was painted in 1849. William Cowen (1791-1864) was born in Rotherham. He worked in London and was one of the founders of the Royal Institute of Painters in Watercolour. His paintings can be found at Chatsworth, the Ashmolean Museum, the British Museum, and Clifton Museum, Rotherham. 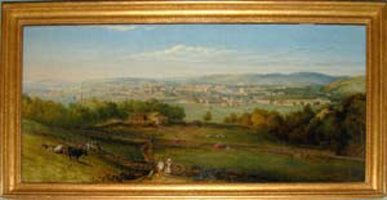 The painting shows Huddersfield and its mill chimneys, with far fewer houses than in modern Huddersfield. See if you can work out what your neighbourhood looked like in 1849.

The museum's Ramsden's Town and Story of Huddersfield galleries have many more fascinating objects showing what makes Huddersfield so special.

Wool had to be scoured, spun, woven, dressed and dyed to create a finished cloth. 'Dressing' or 'finishing' woollen cloth created a close, smooth finish. The cloth was wetted then the nap was raised by rubbing the cloth with teasels. The raised nap was then cropped. It was time-consuming and skilled work. 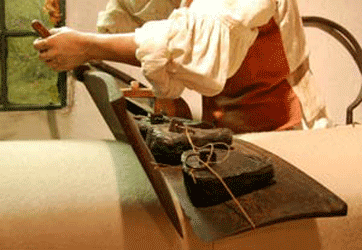 Croppers were highly skilled and well paid. The introduction of cropping machines, which threatened the croppers' livelihoods, was the main local reason for the Luddite riots of 1812. Tolson Museum has several objects related to the Luddites on display.

The cropper is one of a significant collection of textile tools and machines on display in Tolson's Textile Gallery. There are also cloth samples illustrating the high quality fabrics designed and made in this area.

Mrs Sunderland's desk gives a direct link to Huddersfield's most famous annual music competition. Mrs Sunderland was an acclaimed soprano and one of the first female members of the Huddersfield Choral Society. In 1888 a committee formed to create a Vocal Solo Competition named after Mrs Sunderland. They used the money raised at a special concert to celebrate Mr and Mrs Sunderlandâ€™s Golden Wedding Anniversary, held earlier that year. What followed has grown into a nine-day annual festival which has taken place every year except 1940.

The desk was used by Mrs Sunderland and successive secretaries of the Competition Committee until the Committee donated it to the museum in 2001. The museum collections also contain a portrait, poster, programme and medal related to Mrs Sunderland.

Tolson Museum holds a significant collection of musical instruments. Woodwind instruments form the greater part of the collection, some by well-known makers, dating back to the 18th Century. Some Yorkshire makers are included. A small part of the stringed instrument collection was made in Kirklees (especially Huddersfield). There is a small collection of phonographs and gramophones and a large number of phonograph records. Concert programmes, music and other printed ephemera are also represented.