The stunning Elizabethan manor house of Oakwell was built by the Batt family in 1583, but is now displayed as their family home in the 1690s.

View a mixture of authentic and reproduction furnishings, from intricately carved four poster beds to intriguing kitchen utensils. It provides an insight into late 17th Century life. See what the tour has on offer hen visit to see the real thing for yourself.

The atmospheric Great Hall was the main thoroughfare of the house, linking the two wings. It would have been the hub of domestic life and also used as a reception room for visitors, tenants and businessmen, and for large gatherings. It was uncluttered and sparsely furnished to create a large open space, practical to use and impressive to visitors. 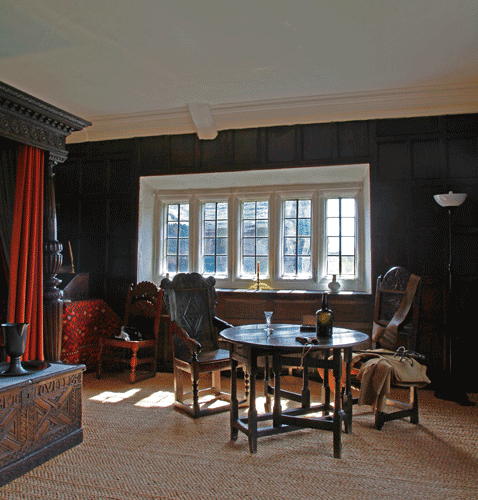 The Dog Gates: The 17th Century oak gates on the staircase were to prevent dogs going upstairs.

Oak Dining Table: The early 17th Century table is over three metres long. A carved frieze has dragons and the initials of the original owner - LM. The frieze is only on one side, indicating the table stood near a wall.

Birstall Chairs: The pair of almost identical chairs has a diamond and pennants carved on the back panel, typical of 17th Century Yorkshire furniture. They were bought from Birstall Parish Church.

This stunning room was the most important of the house in the early 17th Century. The 1611 inventory shows it had the best furniture and held the Batt's collection of maps. In the 1630s the Batts added a magnificent plaster ceiling and had the oak panelling painted. Most of the original panels have survived - the painting technique, known as scumbling, was a popular way of decorating to create an air of warmth and grandeur. 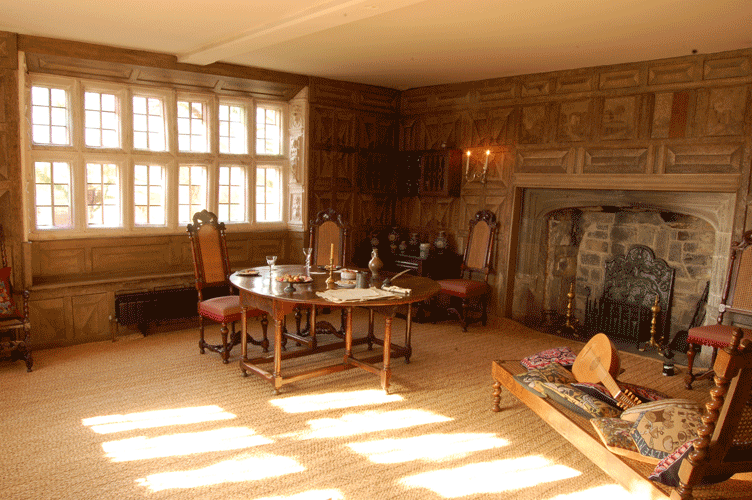 By the late 17th Century, dining rooms and parlours were the preferred rooms for eating and entertaining guests. This room is furnished as a fashionable room of the 1690s. The room originally had a highly decorative plaster ceiling incorporating the Batt coat of arms and the Oakwell Bat. Unfortunately, the ceiling was destroyed in 1883 when a chimney fell through the roof during a storm. Thankfully, a drawing still exists.

The Painted Panels: The 'scumbled' panels at Oakwell Hall are rare surviving examples of the technique.

The Glass Case: This late 17th Century oak case has carved baluster panels on the front so that expensive glassware inside was visible.

Gateleg Table: These began to be popular after the Civil War when long tables become less fashionable.

In 1690 this room was probably occupied by the master of the household, John Batt. A clue is the garderobe or toilet in the outer wall, a luxury enjoyed by few. The rush matting was typical of wealthy households - warmer and more comfortable than floorboards or stone floors. A table and chairs in a bedchamber was not unusual - occupiers might entertain guests with wine and cards. 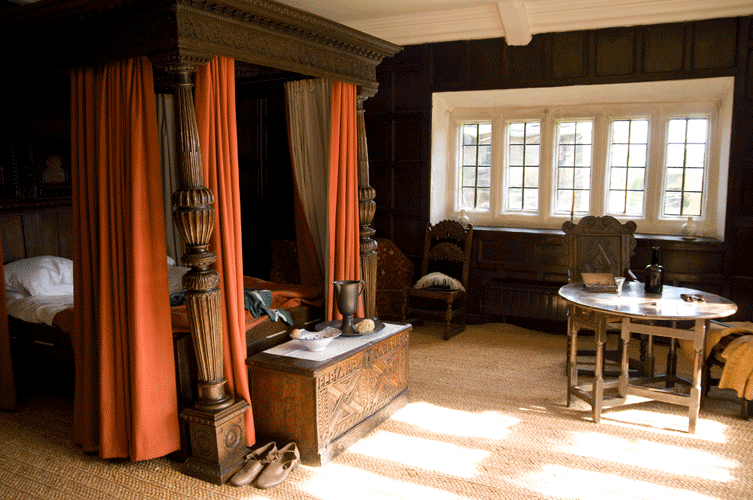 1590 Bed: Beds were often the most elaborate and valuable pieces of furniture in a 17th Century house. This oak tester bed has exceptional workmanship, with floral design marquetry panels and elaborate carving (V&A Museum Loan)

Chest of Drawers: These were becoming fashionable in the late 17th Century, replacing the traditional chest. It was fashionable to paint furniture - black was popular as associated with rare and expensive ebony, as on these ebonised drawer surrounds.

Seventeen beds of different types were recorded at Oakwell in 1611. Some were truckle beds for servants; others were grand tester beds used by the family. Sometimes older beds were relegated to less important rooms to make room for newer, grander pieces. This chamber has older furniture and might have been a second best bedchamber. Original timber studding can be seen on two walls, showing the lath and plaster structure. Tapestries or plain cloths were hung on bare walls for warmth and decoration. The tapestries seen today are reproductions of original designs. 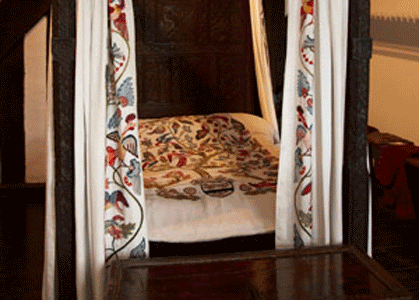 Oldest Chest at Oakwell: From the mid 16th Century and decorated with linen fold panels, it has a simple hasp and staple fastening and could be padlocked for security. (V&A Museum Loan)

Fine 1525 Bed: Expensive furniture such as beds, was handed down in a family from generation to generation, so this bed would probably still be used in the 1690s. The magnificent headboard reflects the status of the family for whom it was made. The message 'DREDE GOD, LOVE GOD, PRAYES GOD' is inscribed on it. (V&A Museum Loan) Bed cover and curtains embroidered by the Friends of Oakwell, incorporating the Batt coat of arms and a 'tree of life' design.

The painted panelling in this room was recently discovered under several layers of emulsion paint and is thought to date from the 17th Century. The room is displayed as the mistress's chamber. The small table is by the window to obtain the maximum light for sewing. All the furniture is reproduction and visitors might think it looks too modern. The effect is deliberate and is intended to show how furniture really looked in the 17th Century - the dark furniture in the rest of the house has become discoloured over centuries and would not be recognised by its original owners. 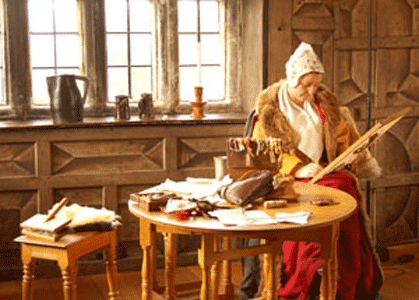 Painted Panelling: This has a three dimensional effect imitating the grainy effect of wood. The wild squiggles imitate walnut - a wood more fashionable than oak but far more expensive. The paint had a linseed oil base and tools such as feathers and combs were dragged over the surface to create the effect.

Bed: The new bed, based on a 16th Century design, was crafted in Somerset. It is corded, with a rush mat beneath the feather mattress giving a fair degree of comfort. Curtains are decorated with crewel work and Jacobean style motifs and patterns.

The 17th Century gentry household had to be able to accommodate visitors, so this room is displayed as a guest bedroom. An adjoining dressing room or closet holds reproduced examples of 17th Century dress. The warm colours of the panelling and bed curtains are echoed by the carpet displayed on the table; carpets were expensive luxuries and often considered too valuable to walk on.

Early 17th Century Bed: Each post is supported by a massive square plinth featuring the lozenge-shaped carvings typical of Yorkshire craftsmanship. This bed was the property of the Fairfax family from Gilling Castle in North Yorkshire.

Dummy Board:These were flat wooden figures, painted and shaped in silhouette to resemble humans and animals. Usually life size, they date from the 17th Century onwards and were used as decorations, fire screens, or even as practical jokes to surprise unwary visitors.

In contrast with the warmth and luxury of other chambers, this room, where food was stored and where the servants slept, has no panelling and no ceiling. Above the kitchen, it was easily accessible for servants via the back stairs. In 1611 this room had five arks for storing meal and grain. Lack of a fireplace and unpanelled walls would have made this room very cold in winter, though the warmth rising from the kitchen below would have taken the edge off the chill and helped to keep stored food dry. 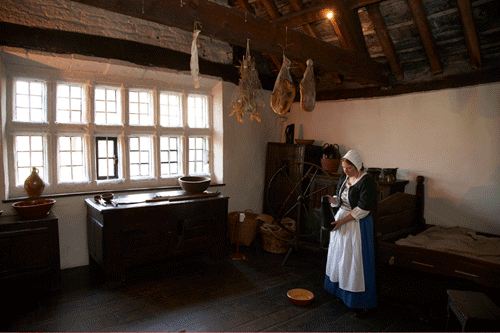 Half Headed Bed: This could sleep several servants at a time. It is roped with flax and had a straw mattress. A crude attempt at decoration is in the head post finials and carved moulding. This bed is quite rare.

Meal Ark: This massive chest was used for storing grain or oatmeal and was found in many 17th Century homes. It could be locked to prevent servants from stealing the contents.

Aumbry: A cupboard usually used for storing food, this 17th Century example is probably German. It has carved 'windows' for ventilation which were added later. (V&A Museum Loan)

Bell Metal Skillet: Most saucepans, skillets, cauldrons and cooking pots had three short legs, making it easy to balance on the fire for cooking. Many skillets had decorated handles, with moral or religious inscriptions. This one tells us: 'Ye Wages of Sin is Death'.

This is a typical modest 17th Century dining room. Servants placed food on the side table and served it to the family; the kitchen was next door so food didn't get cold. The fine court cupboard housed the family pewter and plate which could be kept under lock and key. Similarly the key for the small food or spice cupboard in the corner was kept by the mistress, as spices were valuable.

Pewter: Oakwell has both original and reproduction pewter. The goblets, ewer, basin and chamber pot are reproduction. It was not unusual to find chamber pots downstairs - the dining room was no exception!

Ceramics: Reproduced from 17th Century designs. Porringers are based on potsherds found during archaeological excavations here which revealed the handle design. Blue and white delftware pottery was popular; inspired by pottery brought over by the Dutch King William.

Portraits: It was fashionable to hang portraits of important people in the dining room to impress visitors. See Sir Thomas Fairfax, leader of the Parliamentary army at the Battle of Adwalton Moor and William Cavendish, leader of the Royalist army at the same battle. There is also a copy of Lely's portrait of Charles II.

The kitchen was the busiest room in a 17th Century home. The servants prepared food, medicines and Potpourri and there was a constant stream of tradesmen, estate workers, errand boys and servants of visiting gentry. At mealtimes, the servants would gather to eat off wooden platters.

When Oakwell was built the cooking was probably done over a large fire at one end of the Great Hall, but by 1611 the kitchen was a separate room. The kitchen is divided from living areas by a passage, so smells and noise would not penetrate the family rooms. An original larger fireplace was replaced in the 19th Century. Evidence of previous occupants can still be seen by candle burns on the timbers of the wall opposite the window.

Stove: This reproduction is based on an original in Skipton Castle. It was used for preparing sauces, oatcakes and so on, away from the smoke of the main fire. Charcoal embers were put in fire baskets on top, then food was cooked in saucepans on trivets above them.

Storage Cupboard: This was probably once a serving hatch through which food was passed from the kitchen to servants in the passage, then carried to the Great Hall.

Cooking Implements: Mostly of iron, their size and weight added to the difficulty of open hearth cooking. Saucepans, meat forks and ladles had long handles to reduce the risk of burns. Spits sometimes had an elaborate pulley, but were more often turned by the kitchen boy.

Get in touch with a member of our team.

Receive news and updates from our museums and galleries, and find out more about our events and exhibitions.

Your support allows us to develop our programme of exhibitions and educational activities, care for our collections and to bring the exciting stories of Kirklees to life.